Don’t hate me for tearing out a page from a book I got for 50 cents at last weekend’s garage sales.  The book is Paris to Portland 2003 and gives an accounting of the art pieces available to the Portland Art Museum from France. 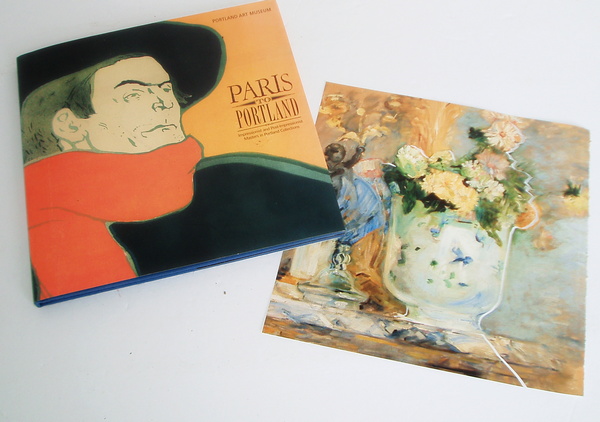 This oil on canvas was painted by Berthe Marie Pauline Morisot in 1855.  It is titled “La Chimenee`”  I think it is lovely to pluck a page from a forgotten book and give it new life. 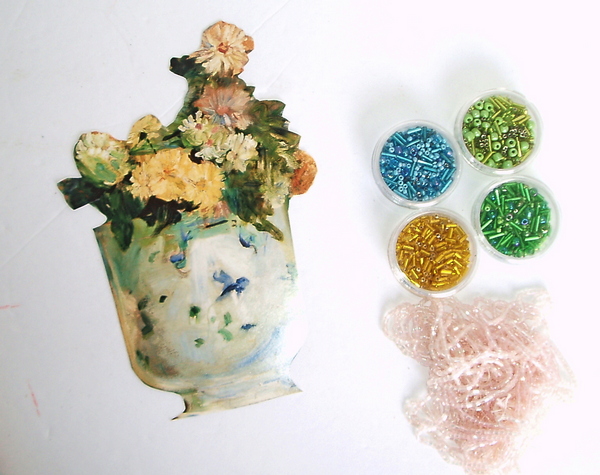 I got these seed beads and bugle beads two weeks ago at a garage sale and they would be the perfect fit to make this photograph a mixed media piece!

I used Diamond Glaze because it is clear and dries to a super shiny finish.  Since it is clear it was really easy to get the bugle beads in the correct position with tweezers. The canvas board was one of five boards I got last weekend at another  garage sale and measures 5 x 7.  I painted it a soft yellow with acrylic craft paint.

I like to investigate the artist when I pull a page from a garage sale book and was happy to discover Wikipedia had a nice biography of  Berthe Marie Pauline Morisot!

“She lived from January 14, 1841 – March 2, 1895) was a painter and a member of the circle of painters in Paris who became known as the Impressionists. She was described by Gustave Geffroy in 1894 as one of “les trois grandes dames” of Impressionism alongside Marie Bracquemond and Mary Cassatt. In 1864, she exhibited for the first time in the highly esteemed Salon de Paris. Sponsored by the government, and judged by Academicians, the Salon was the official, annual exhibition of the Académie des beaux-arts in Paris. Her work was selected for exhibition in six subsequent Salons until, in 1874, she joined the “rejected” Impressionists in the first of their own exhibitions, which included Paul Cézanne, Edgar Degas, Claude Monet, Camille Pissarro, Pierre-Auguste Renoir, and Alfred Sisley. It was held at the studio of the photographer Nadar.
She was married to Eugène Manet, the brother of her friend and colleague Édouard Manet.”  (Wikipedia, biography of Berthe Marie Pauline Morisot)

I admit I never heard of the artist before yesterday and it was fun to make this little mixed media piece with the history in mind! She made La Cheminee` in 1855 and I gave it a new little puff of life 163 years later.  :  )